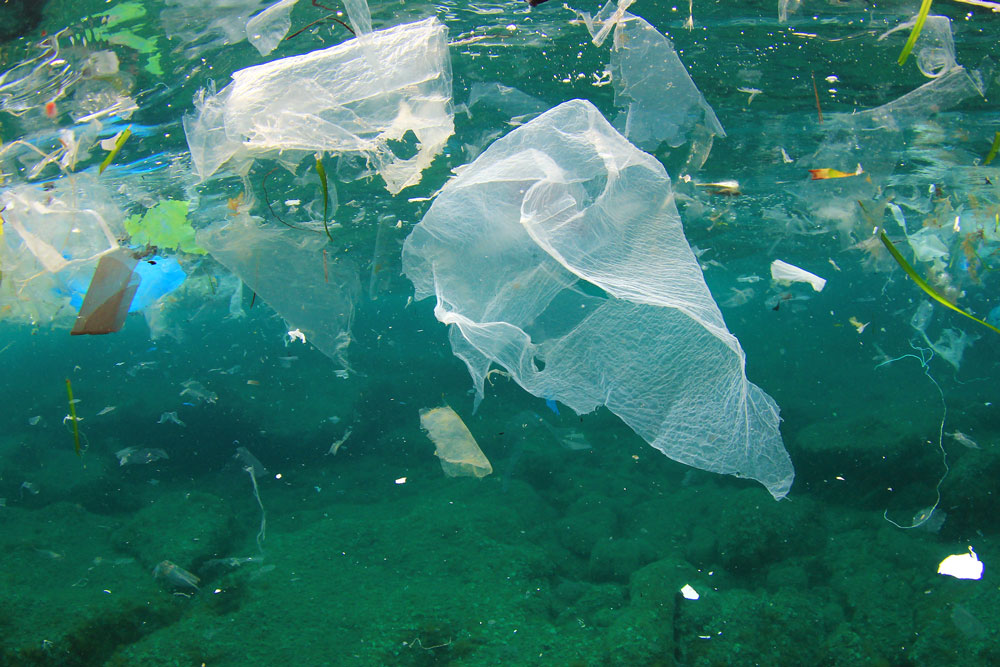 Did you know more than 8 Million Metric Tons of Plastic Waste Enters the Sea from the Environment every year?

Plastic waste gathers in the world’s oceans through downstream currents from nearly every terrestrial location. Collecting and concentrating in the midst of global ocean currents called gyres; breaking down into small fragments known as micro plastics, being ingested by marine species and sinking into the deep-sea. The great pacific garbage patch is one particular gyre located in the Pacific Ocean between Hawaii and California. The great pacific garbage patch is known for the detrimental impacts of plastics to seabirds nesting on nearby islands and to the surrounding marine animals.

What are the Causes of Plastic Pollution in the Ocean?

Plastic waste is caused by the large amount of anthropocentric plastic in production. This leads to ocean plastic pollution caused by; inadequate waste management, fishing industries, nautical and beach activities, overboard shipping containers, urban and storm runoff, suburban and industrial activities, construction, illegal dumping and littering. Rivers, streams and waterways collect the plastic waste from the environment, where it travels downstream to the ocean. The most common types of plastic seen in the media washed up on beaches or collecting in gyres includes; fishing gear, plastic bags, plastic bottles (water bottles), food packaging, straws and other forms of single-use plastics. Studies show only 6% of plastics in the ocean actually float. Products including HDPE, LDPE and PP can be found floating on the ocean surface. However, most plastics (PET, PVC, PS and PLA) have a density greater than seawater. Overtime algae, marine life, weathering and ultraviolet (UV) radiation degrade the plastic polymers causing the marine debris to sink.

How does Plastic Pollution affect the Environment?

Annual projections indicating the consumption of plastic is expected to double within the next 20 years. Scientists estimate by the year 2050, plastics could account for 20% of global oil consumption, 15% of greenhouse gas emissions, and indicate there could be more plastics in the ocean than fish. Marine pollution is a contributing factor causing to global issues such as climate change.

Marine plastics have been known to release polychlorinated biphenyls (PCB’s); an extremely harmful and toxic chemical. In marine animals it can lead to poisoning, suppressed immune systems and spawning and reproducing failure. It has also lead to bleaching in corals known to ingest microbeads and other microplastics (mistaken for plankton and fish brine eggs) containing PCB’s. These plastic particles become entangled in ministerial tissue within the coral’s gut cavity. Large numbers of humans have been exposed to PCB’s through food contaminated with the toxic chemical, climbing the food chain. The Asia/Taiwan incident showed development delays, and memory and behavioural problems in children who’s mother ate large amounts of contaminated fish from Lake Michigan. PCB’s show detrimental impacts to human health when ingested in high doses.

The entanglement of seabirds, fish and marine mammals has lead to a significant increase in mortality rates among these species. Sea turtles are at a high risk of consuming grocery bags, mistaken for jelly fish when submerged under the ocean surface. Many marine animals have been found malnourished and starved with plastic pieces congested within their gastrointestinal tract. In high plastic pollution areas, it is estimated more than 36% of fish across 130 species have ingested plastics. Half of these fish include species popular among human diets. Ingested ocean plastics can reduce growth and reproductive output in marine species, causing concern for humans who have also unintentionally ingested plastics.

Is there a Solution to Plastic Pollution?

A solution to plastic pollution would require the prevention of plastic debris ending up in the environment and ocean. Today the amount of plastic produced annually is near 400 million pieces of plastic. One of the major issues with the production of plastic is the worlds inadequate waste management. Plastic waste is sent to landfill or shipped overseas where waste mismanagement rates are over 80%. Despite its detrimental impacts on the environment, plastic is a durable, cheap and versatile product. Plastic is also chemically and environmentally resistant, making it resistant to corrosion and premature decay. Improved waste disposal facilities have the potential to repurposed and reuse this versatile material. In fact, one polymer of HDPE plastic can be recycled up to 10 times. Which means one milk carton can remove 10 milk cartons from the marine environment in retrospect.

What can we do to Reduce Plastic Pollution?

There are many things that can be done to reduce plastic waste in the ocean and environment.

As an individual you can: